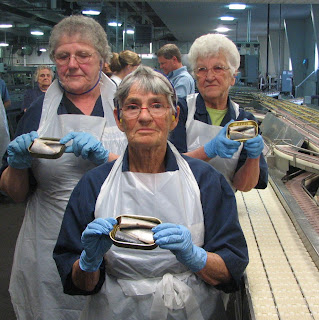 The last sardines canned at Stinson's. This photo courtesy of the Maine State Museum, where the last three cans will be a part of a new display opening Saturday, July 31.
Posted by Gary Lawless and Beth Leonard at 7:40 PM 4 comments:

We have available two new poetry chapbooks!
First: Sardine Songs/ Herring Hymns = a 24 page collection of the poems published on this blog, from a wide range of poets, all with a sardine/herring theme.
And: Sardine Shards - 12 pages of sardine related poems By Gary Lawless, published by Benevolent Bird Press
Each book is $5, plus $1 mailing from Blackberry Books, 617 East Neck Road, Nobleboro, Maine 04555
Posted by Gary Lawless and Beth Leonard at 11:40 AM No comments:

Requiem for the Maine Sardine

Maine's herring once swam by the trillion,
But the meek of our race are six billion.
So many, we've eaten,
they're pretty well beaten.
Now it's hard to find half a million.

The herring got little respect.
It was scorned by the social elect.
The Hollywood star
just adored caviar,
but a can of sardines, she'd reject.

Those born to imperial bearing
were seldom consumers of herring.
It seemed kings and queens
rarely noshed on sardines
(at least, when their crowns, they were wearing).

The homely lobster is able
to grace the millionaire's table
but sardines were favored,
(with mustard well savored)
by the man who cleaned his stable.

On his yacht, the great Wall Street banker,
for filet of sole, sure did hanker;
but his cook and skipper
would divvy up kippers
with the sailor who heaved the anchor.

The lawyer who drove a new Caddy
and dined on poached finnan haddie,
was also unerring
at shunning the herring,
but they were enjoyed by his caddie.

While the Texas oilman grew fat
eating barbecued "channel cat"
the roughnecks were sharing
Blue Ribbon and herring
and feeding sardines to the cat.

Maine sardines, it has come to pass,
though spurned by the very top brass;
were loved without question,
and doomed to digestion,
by humankind's lowlier class.

They say Martha Stewart's unsparing
in her disdain of the herring;
though she ate, in her cell,
canned sardines for that spell,
when prison clothes, she was wearing.