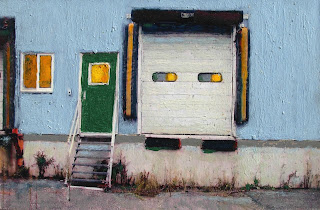 "The city has given the owners of the former Stinson Seafoods sardine
packing plant three months to tear it down"
- Walter Griffin, Bangor Daily News, Sept. 15, 2009

Checking on the building the morning
after the announcement in the BDN,
the facade looks suspicious,
yellows of the eyes in the sliding door

looking sideways as if
on guard for the demolition crew
covering its ears as if it doesn't want
to hear the order to tear it down.

yet refreshed with a coat of paint
by an artist with a love for the overlooked,
windows newly glowing, doors
bright green again with the promise

of men and women arriving for the morning shift.

"Shoo," she says and waves me away
like a big fly, though she's been happy to talk,
her lip sticked mouth taking me word by word
through her life: born in this town, never left,
widowed once, divorced twice, one daughter --
now dead -- and forty years in the fish factory.

She and the girls loved every minute of it,
racing -- piece work, you know. Gossip swooping
through the long room like a flock of starlings
while their hands, separate animals, filled
hundreds of tins day after day. Some days
they'd lift a big icy fish from the crate,

lay it on the boiler to steam, then eat it
with their fingers. There was never anything
so fresh. She fiddles with a button on her robe,
her nails roughly painted to match her mouth,
and, no, she doesn't need help with her shampoo,
washing her creases, soaking her swollen feet.

She looks as though she never could get out
of that chair, but somehow it's easy
to see how she would have stood on a corner
in the South End, her feet in pumps, one hip
cocked, talking to a girlfriend and seeming
not to notice the men from the shipyard loose
on a Saturday night in their clean white shirts.

Up in Damariscotta Mills
is a fisherman
eyes blue and wet as gurry
from the Thunderbird
that helps him trap rundowns
and passing tourists
alewives for a quarter
five for a dollar
if you're local
if you're not
but willing to linger
he'll talk, knit tales
of the leather board mill torn down
his smokehouse put up quick
by the fish runs
dips them black from the Sheepscot
smokes them to copper, I say
smokes them til done, he says
strung on fish sticks symmetrical
gills lined up like buttons, I say
mouths made for the sticks, he says
laughs and hands the wine around
packed down in brine
dried 800 to the barrel
shipped to the Caribbeans
love 'em! he says
why do you think there's so many?
alewives or Caribbeans, I say
eat one you'll conceive, he says
laughs and hands the wine around
smoked alewives half his life
the other half in Boston
M.I.T. at the Old Howard
fell in love with Ann Corio
"You think you see more
than you actually do" he says
laughs and hands the wine around